After three months of hearty time with mum, present state snoozing alarm, trans-mind, minced words and silence. My lil Ms Sunshine (mum) is back to India and I’m kicked from riches to rags, good time flies fast sigh! Changes and breaks are vital in life, during the time off, experimented quite a lot on food and photography this post is one of those. I heart Finnish salmon soup, the first time I heard about fish in soup, was skeptical how it would be like? it took two years to me to give it a try and no looking back since then. 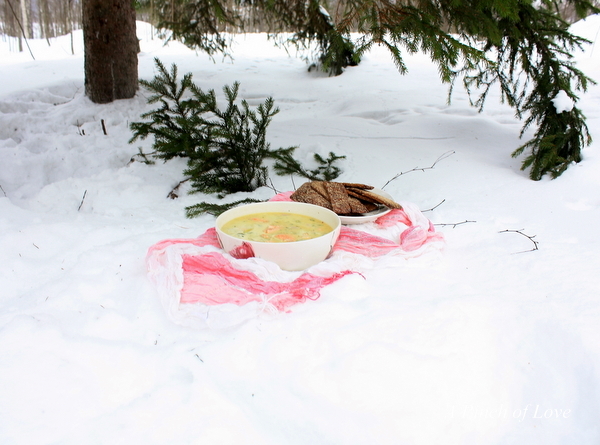 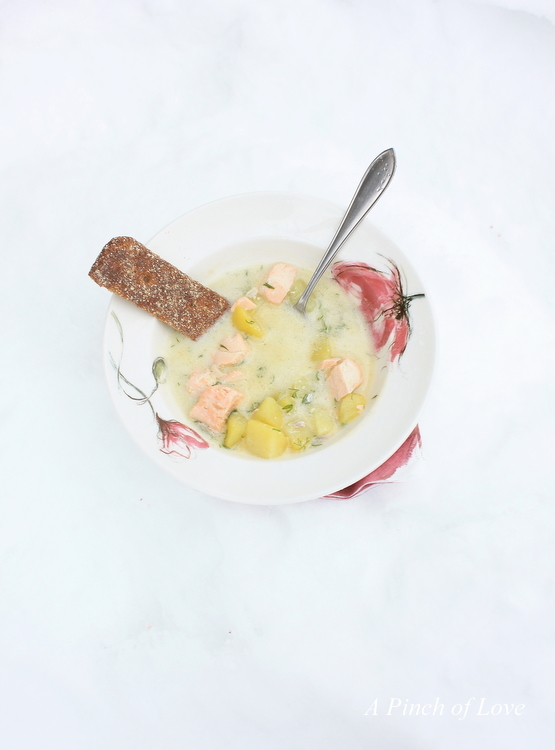 One of my wildest wish was to do food photoshoot in snow. After a series of thoughts we decided soup with a fancy idea to capture steam from hot soup. One fine day when weather prediction stated -10 C and mild snow, found it be the best day, since lighting would be perfect and fresh snow will help for clean surface to place the food. We had to get prepared quite a lot, felt like we were going for a picnic as we needed whole lot of stuffs to get the food placed well. Hunt for the location was challenging, mum found one good place, very near to apartment and mainly since it was clean and I could also get the forest view. We got ourselves packed and started the shoot, after 5 minutes I couldn’t sense my fingers, God it was hurting, poor mum she helped me quite a lot, in-spite it was extremely cold her. 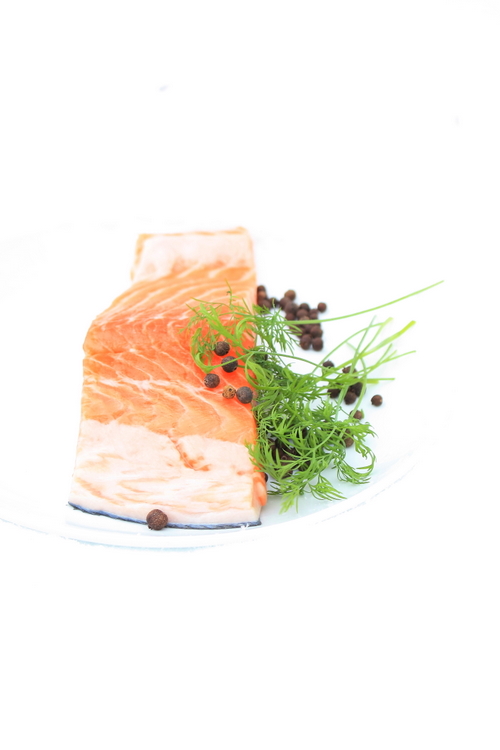 It took almost 35 minutes for us to get it done. That’s when I thought decided never to try any of my crazy ideas. On brighter side soup was great, Marjut, my Finnish food chef/guru thought me how to cook the soup and she certified it was good! In case you are in search of steam in the picture, chuck it off guys, the soup was frozen the moment it was out in the bowl….brrr! 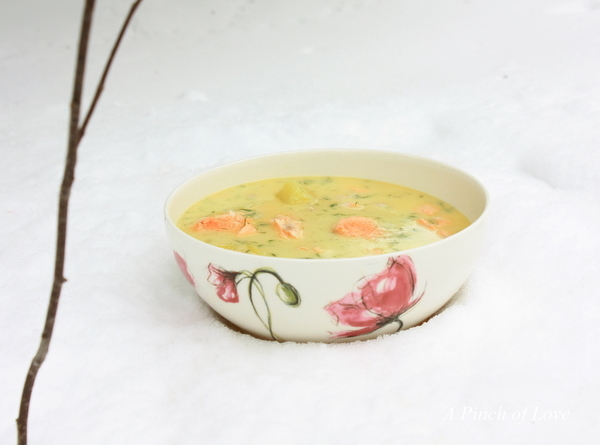 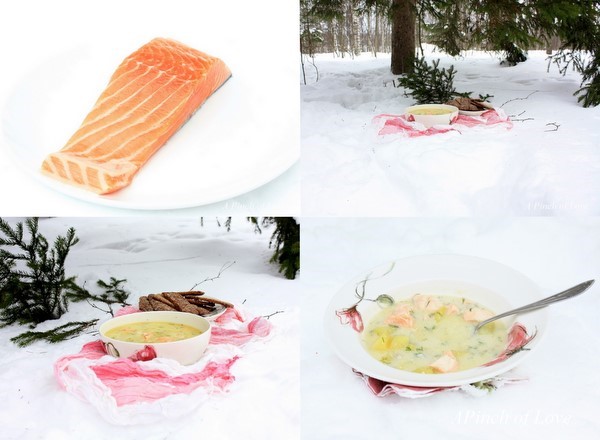 Apart from all these, I can’t get out of what is happening in Japan, it’s extremely sad for the beautiful country. My friends in japan are safe, but we are still devastated seeing all the disaster. Nuclear explosion, radiation leak has been the talk of my department, questions/politics of nuclear research has started? I pray God for the least consequence of radiation leak. The same goes for the heart wrenching earthquake in Christchurch, immediately wrote to Sue, she is fine but she lost her house, horrible! From my previous post, I did learn that we have no control over nature, but my prayer goes to all the brave souls fighting out there, for strength and hope. Amen! 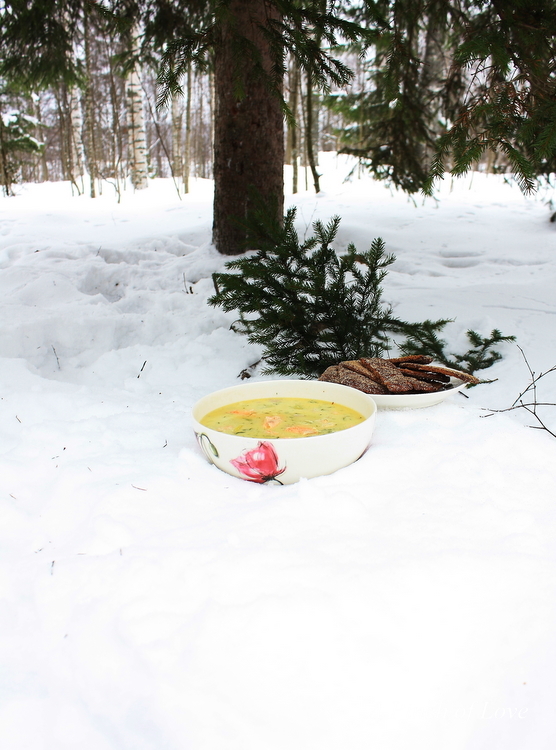 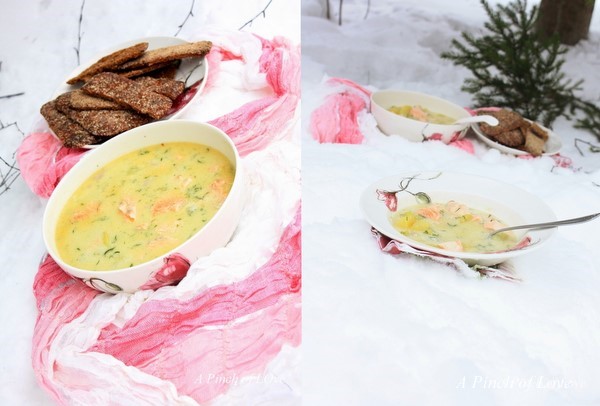 For more physics behind the radiation leak and earthquake check few links here and here. 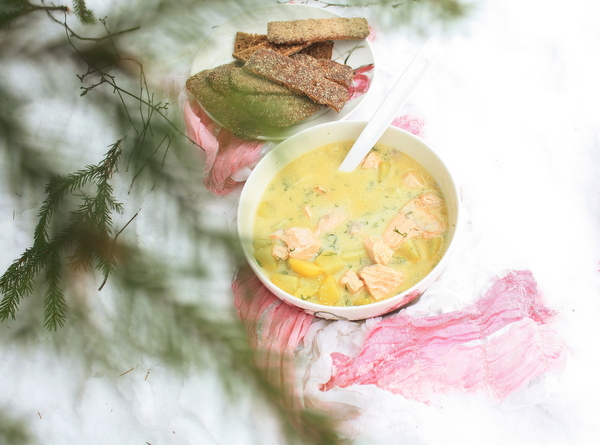 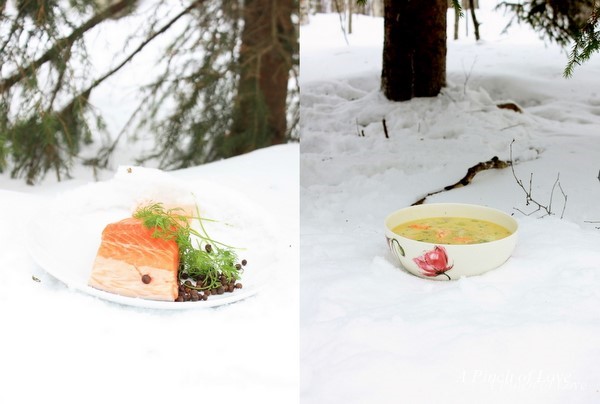 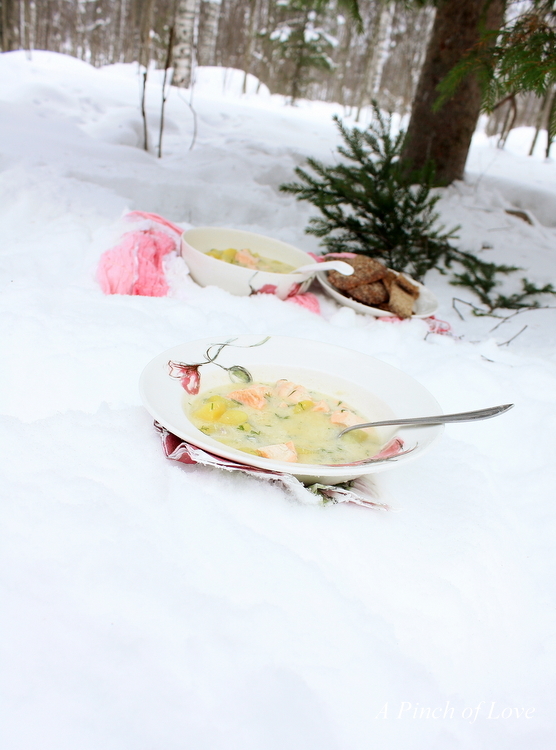 Ingredients
250 gram Potato (pealed and cubed)
300 gram Salmon (diced)
750 ml Water
1 large Onion (diced)
One bunch of fresh Dill (separate the stem and upper bunch )
40 – 50 Pepper corn, NOT CRUSHED (I Didn’t use the black pepper corns, here we get brown version which is milder, traditionally used for this recipe i followed it, you can replace it black ones)
100 ml full fat cream  (I used low fat look for the note below)
25 gram butter
Salt to taste
Method
In a deep pot, pour water, add salt, pepper corns, diced onions and dill stem. When water gets to boil, onions, pepper corns are soft, filter the water and smash the remaining so the pulp gets to the water and flavour remains there. Now add the whole salmon piece inside the soup and let them cook, it hardly takes 5 to 6 mins. Very carefully take the whole salmon piece out and let it rest in the plate. Now in the same water add cubed potatoes. Let it cook it is soft. While potatoes are cooking, peal the salmon skin and carefully dice the salmon into cubes. After potato is cooked add cream and some shredded dill, when it just comes to boil, add the cooked salmon, shredded dill and butter and serve it warm.
In Finland it is typically served with rye bread…yum!
Few Notes:  It felt the butter was bit lot for me, next time i will reduced to half, since I’m never a butter person! I used low fat cream, so I felt the cream was not smooth but had but cuddle effect, so I was recommended to used full fat cream.
If you don’t like to cook whole salmon piece, you could use the cubed version, you could add them add it after cream comes to boil, take care to cook since it is already diced,  the layers might get dissolved in soup when it is over cooked.
Share it...