“The eggs are the backbone of cooking, the cement that holds the castle of cuisine together.”

From the book mastering the art of southern cooking!

As you all know the main components of egg is albumen and yolk, which is mostly composed of protein.  Apart from proteins egg white contains water, small amounts of minerals and sugars whereas the yolk contains fat, vitamins A, D and minerals such as calcium, thiamine, and riboflavin. Depending on the feed of the bird the yolk colour ranges from yellow to deep orange (when the birds are fed with good feed).

The proteins are made up of long chains of amino acids.  In the raw eggs proteins are in their native state, i.e. they are in globular form, which means amino acids are twisted, folded and/or curled up in a very specific way giving the protein its shape and properties. Any induced alteration (mechanical or heat) to these proteins will in turn significantly alter the entire structure of the egg.

The significant changes in the eggs happen due to the surface properties of the amino acids such as hydrophilicity (water-loving) and hydrophobicity (water shy).  For an example in a curled up amino acids (imagine the protein in the form of a sphere) the water-loving part of the amino acids are facing outside interacting with water, whereas the water shy surface is facing inside (in the centre). This interaction with water will keep the protein in its shape until you start boiling or whipping your eggs.

When eggs are whipped the protein is exposed to air. Because, the mechanical energy obtained causes the proteins to uncurl to its original long chain leaving the water-loving parts to interact with water and the water shy parts are left dangling with air. These uncurled proteins bond with each other, creating a network to hold the air bubble. This process of creating network is called binding or coagulation which finally results in egg foam. Heating the egg foam will increase the pressure and volume of the trapped air inside the bubble, which is due to the expansion of air due to heat (ideal gas law). When treated with care, like in steaming and baking the amino acid network surrounding the air bubbles solidifies (by creating covalent bonds) due to heat and this structure will retain its shape even if the bubbles burst due to increase in pressure. By this process, the cakes, soufflé and omelette are fluffier.

The ability of eggs to incorporate more air while whipping is initiated by addition of few drops of acid such, lemon juice, vinegar or cream of tartar.  Naturally, fresh eggs are acidic in nature and lose its acidic content while ageing. Thereby, by the addition of some amount of lemon juice to an egg for omelette makes the egg whites frothy during beating.  While cooking steam rises through the omelette making the omelette fluffier.

So folks these were some interesting facts about eggs and how to make our omelette fluffier. Also, the initially part of this recipes is similar to the process of omelette, where the egg is not fried but steamed and added to the korma….do you fancy? Hop over to the recipe! 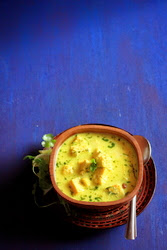 For Steamed Egg
For Korma