My new found interest is to make fondant cakes. God it opens great doors, windows for creativity. I haven’t still mastered the technique. I’m a youtube learner, sometime spending long time jumping from one video to another…anyhow all I can is it is SO much fun. Moreover when it come for delivering the cakes, fondant cakes are more stable and gives a striking appearance.

Yes folks you heard it right, APL is now taking cake orders, if you fancy a cake for any occasion just drop us a message! These two fondant cakes was made for mother’s day celebration and for birthday. Mother’s day cake was made from vanilla cake, layered with whipped mascarpone and rum roasted cherries frosted with swiss meringue cherry butter cream frosting. Birthday cake was chocolate cake with with swiss meringue chocolate cherry butter cream frosting! Hop in for the recipe! 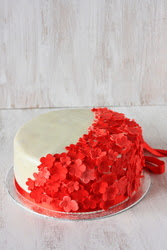