Spring is in air. The greenness, freshness, delicate fragrance, aren’t you enjoying the beautiful time of the year? Belgium is just warming up, with occasional showers which makes the green look greener.  How are you all enjoying your spring? I’m quite occupied in learning dutch, redeeming the slumbered language part of my brain, believe me people it is one full job in hand, but it’s certainly fun (I say this to myself, as process of self encouragement)! In addition to language- the so called fun, craziness of life, cake is and will always be there on my priority list. This cake was one of those cakes that I dreamt all along the days until it took shape. The Forest theme cake was designed for a two year old little one, who’s  name means forest. I have to admit creating every bits and pieces of this cake was an intensive fun. My creative thoughts ran really wild along with wild life modelling. It also brought my hidden childhood love for wildlife. Though I would be really scared in reality to take pictures of wild animals, I really wish I have the courage to do it. If not in real life there is always a fantasy world, so creating modelling of adorable wildlife made me a happy girl!

Every stages of this cake was designed with at most care keeping the little one in mind. I made sure, the colours and figures are attractive in the first place. As I have been mentioning before, I’m a youtube learner, all the animal figures were made seeing the youtube tutorial. All the models were made two to three days before, this helped to speed up the final layering and decorating process. Also when figures get dried, they get firmer and retains shape well. The tree and grass was my own creative idea. The base of the tree is made using floral wire and tapes, that is generally used for making fondant flowers. After giving the base, I twisted the brown fondant along the wires to give it a natural look, and very carefully two shade leaves were inserted into the fondant. The grasses were thin strips of green fondant that was irregularly cut and very random placed along the base if the two cakes.

Both the tier cakes was two layered brown butter cake. I sandwiched the cake layers with cardamon mascarpone cream. For frosting I used swiss meringue butter cream frosting with cardamon flavour. Brown butter always reminds of the clarified butter (ghee) that is commonly used for making Indian sweets and Indian sweet is incomplete without the flavour of cardamon.

Ok folks, I hope you all will enjoy virtually this forest theme cake as much as I and the little birthday boy did. I was informed by his mom that, he was beaming with happiness when he saw the cake and he enjoyed eating parts and bits of all the models. There is nothing more happier than this feedback for a cake maker. 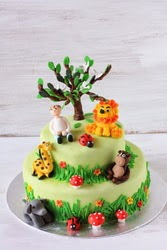 For Brown Butter
For the cake:
For Mascarpone Cream layering
For Cardamon Swiss Meringue Buttercream
Layering and frosting of the cake
Fondant decoration.