Sun has started to smile saying good bye to winter. We are having occasional beautiful days in Belgium. Easter around the corners, beautiful fragrant narcissus dancing to the tunes of wind, one day while I was walking to home, I remember how every year without fail I used to get beautiful handmade eggs from my Godmother during easter. Pink being my favourite colour, she always made sure to make something pink for me. It instigated me to do something this year.

END_OF_DOCUMENT_TOKEN_TO_BE_REPLACED

Today, I have greatest respect for chefs in the restaurants. Managing different counters, sue chefs, maintaing food quality and moreover to satisfy the customer isn’t a cake walk. I learnt it from my experience in an evening.  After heavy planning and analysing I zeroed to jal jeera, papad with tomato salsa for starters, tadka dhal with rice, naan with butter chicken, vegetable korma, tandoori chicken with mint dip and mango lassi as main course. For dessert we had carrot(gajar) halwa and semolina (shoji)halwa.

END_OF_DOCUMENT_TOKEN_TO_BE_REPLACED

I have been happily busy since end of June with bbq, baby shower, meeting food blogger friends, friends from Finland and Austria….we have been enjoying Belgium summer with great chocolates and beers. I have never been a beer person, but there is something about Belgian beers, its slowly growing on me, especially the fruit and light ones!
Ok folks, until I keep enjoying with my 3rd batch of good friends who will landing this Saturday in Belgium. I will let you stroll thro’ the pictures from baby shower party, which I organised (Oh it was fantastic to play with blue and white). I loved playing with fondant again after a big failure from my first trial. I’m quite happy with the results this time, though I still need to work more on the fondants.     Those butterflies were made using the fondant print and I left them to dry between the chopstick to give it a feeling of flying. For some butterflies I used single colour fondant and some I mixed few colours. (Be a baby and play!) The menu for the evening was carrot cake with orange flavoured cream cheese frosting, vanilla cupcake with mascarpone frosting, button cookies, Indian home made biscuits and lemon pineapple punch.  Note, how to turn normal use and throw cups to pretty ones, wrap a fancy tape around the cup and top with some stickers, they were adorable…Also meet my old hobby crochet.
If you still on the sunny side of the world….happy summer and happy baking! 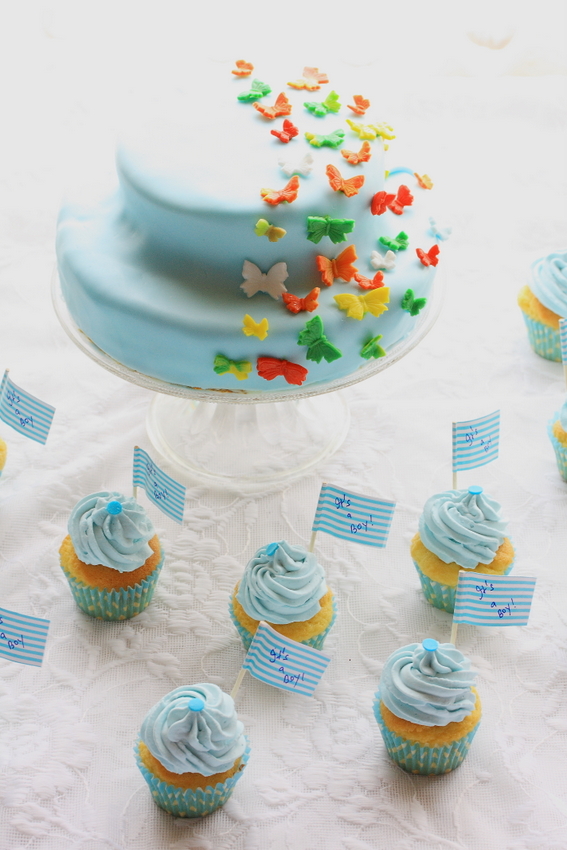 END_OF_DOCUMENT_TOKEN_TO_BE_REPLACED
Hello folks! I’m back to Europe, more precisely in the country of chocolate, waffles, french fries – Belgium as post doctoral researcher, after a wonderful long break in India. Under extreme threats and social pressure I’m doing this blog post (read happiness included). Hopefully soon I will regain my enthusiasm for doing regular post, which I honestly want to. Belgium so far has been good, great chocolates, french fries with mayannoise (as a meal along with meat or veggies? hello excuse me? that’s what i felt for the first time), now I’m getting accustomed to it, rather liking it. But still would prefer on the rainy day with salt and pepper to nibble away! Very good dairy products straight from farm, fantastic oranges, I’m totally in love these fresh bright little ones……and I’m yet to explore others. Though I know we get pretty good beer’s here…. its never my territory! Aah and thanks to institutes I work, for being situated away from the city it gives me a chance to be in  picturesque cities.  Will promise to post some pictures!
Anyhow people, this is a very basic post to say we are alive. Made this cookies to give me some energy  during tea time at work, this is third time i’m doing this cookies, totally chocolatey! Go for it, trust me it can be addictive!! To all those people who kept this space alive and running, a huge thanks. I have something very special for all my blog readers from India, so tune in for more in the coming weeks! First food pictures from Belgium, with no proper prop and setting, excuse the harsh lightings and deep shadows. 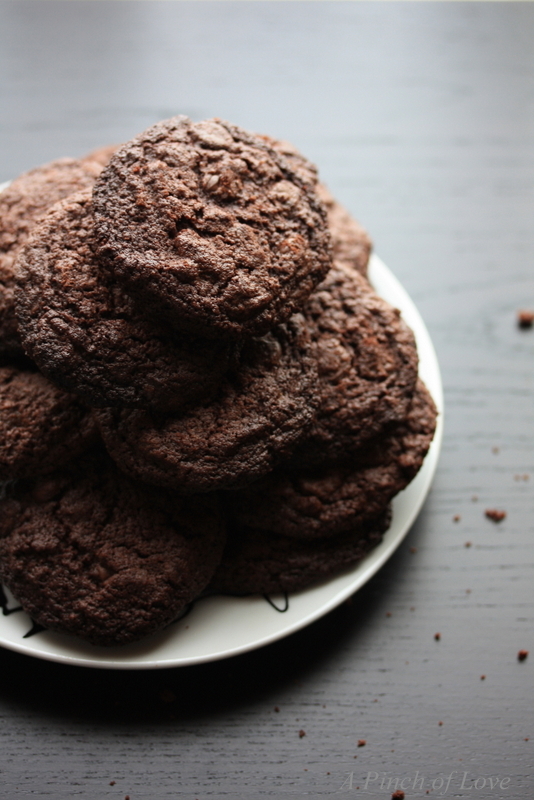 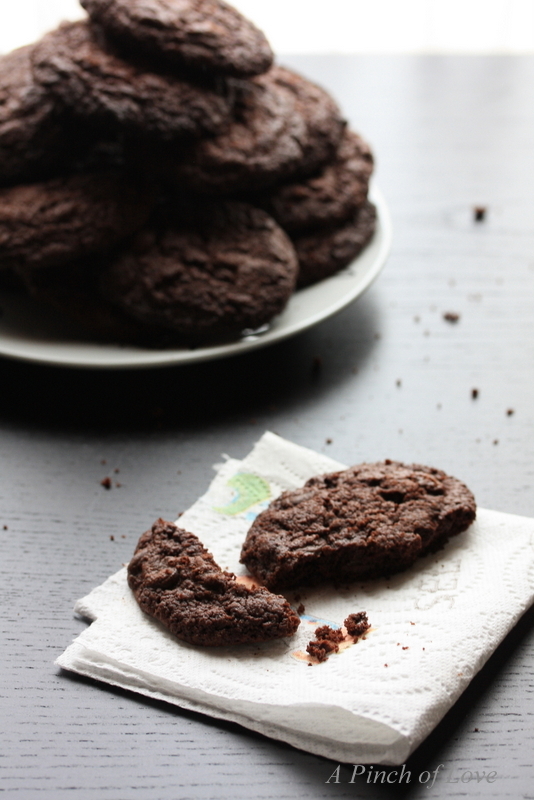 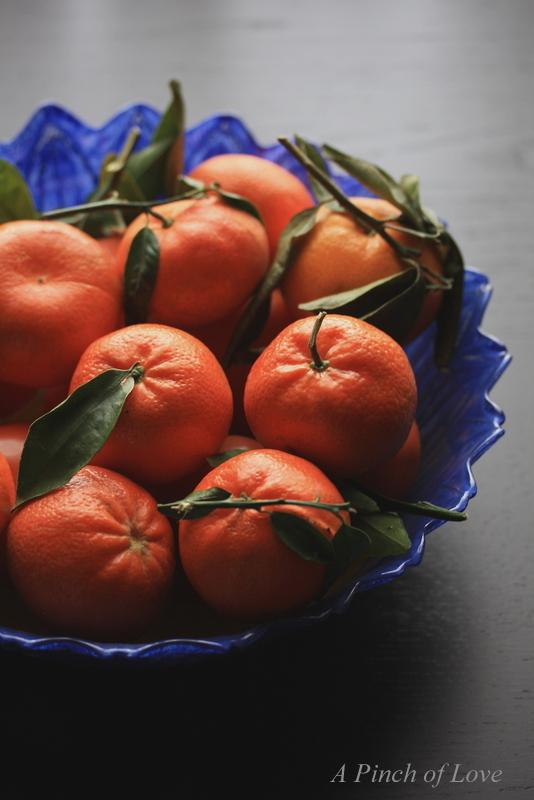 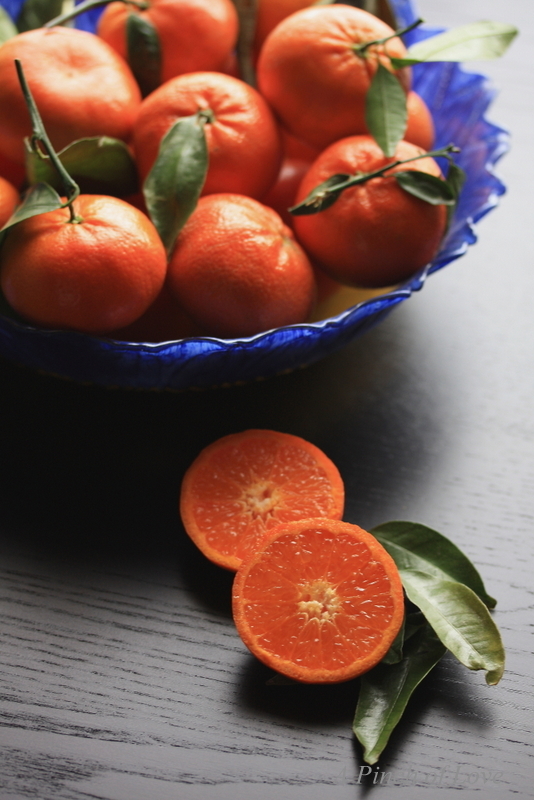 For Recipe Jump to

here
Months after I stepped to Finland in 2005, I got to know three wonderful Finnish family who have adopted three Indian baby girls, two from south  India and one from north. To connect with these family has been a blessing for me, have seen them growing for past five years. First time when I met one of those babies, her parents ran to me asking if was from south of India and could I speak in Tamil? Initially she used to very well understand Tamil and smiled when I spoke with her that’s when we started to connect later I got to know two other families. These days they hardly remember any Indian languages, but speak perfect Finnish! 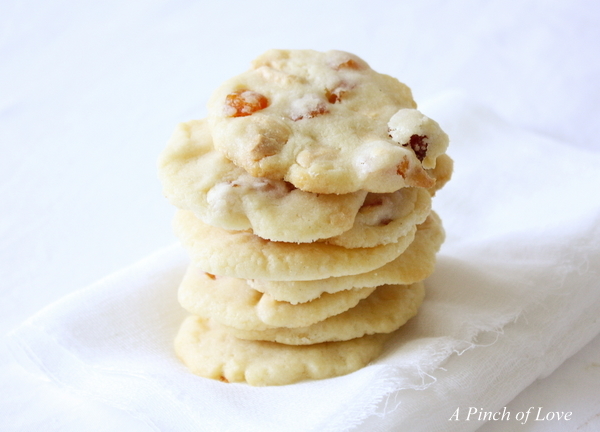 I meet them now and then since not only I get chance to be with three lil girls but also with other blue eyed cute Finnish boys, families own kids. Most of the time, I hear their stories, though I don’t understand, play toys or just run up and down! My evening with them are so relaxing and enjoyable. Last summer (yes pretty old  recipe I say which was resting in hard disk, had to come out finally) for a evening with one of those kids, made apricot white chocolate shortbread, thinking she would like it. I was wrong! 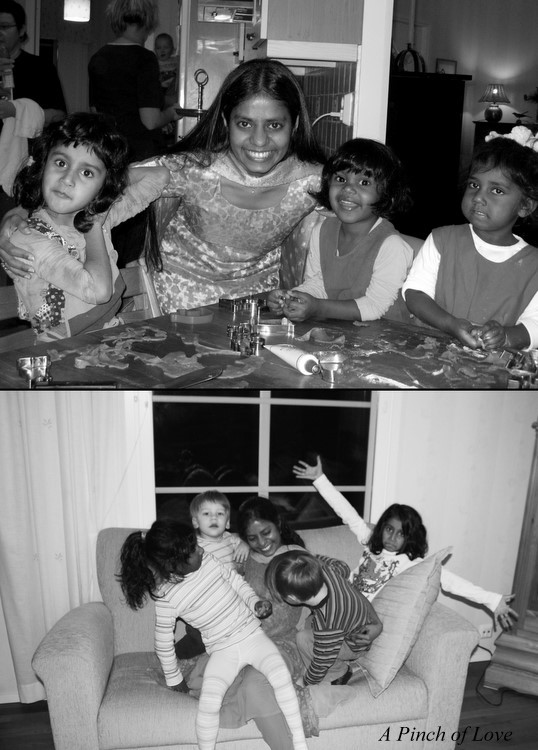 As always we went around up and down, they had two fat cats, am not cat person they freak me out, knowing that she made sure cats sits on me and I was literally running from her, letting her to laugh loud and her mum saying stop!! 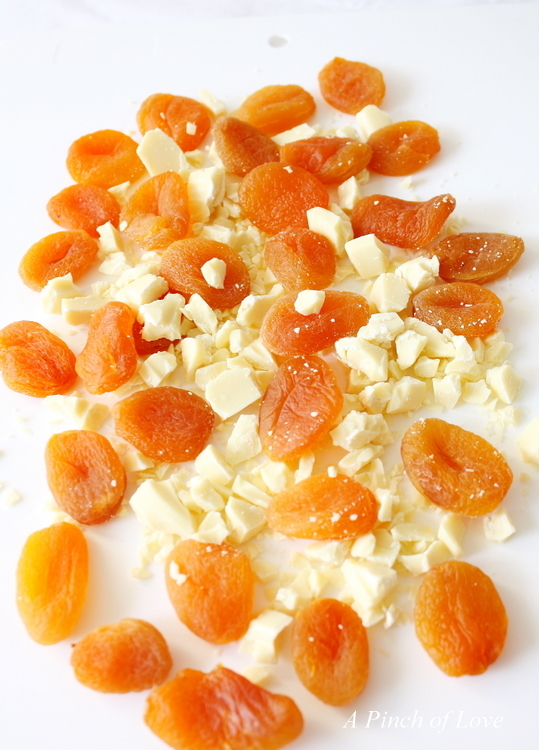 Then came cookie time, the moment she saw my cookies, she asked “Mita…?” (what is ….)  followed by “Ei…” ” No….” all that was running in my mind was “Oh Ananda, you failed to impress a little girl, go jump into the lake”. Beside my shortbread, there was yum strawberry fresh cream cake glowing, no wonder she hardly had a look at my shortbread. Even-though her mum tried to convince her she didn’t bother much as she was licking clean her mum’s cake. I wasn’t sad but was smiling all the way and enjoying the cake aswell, but others were happy with my creations. 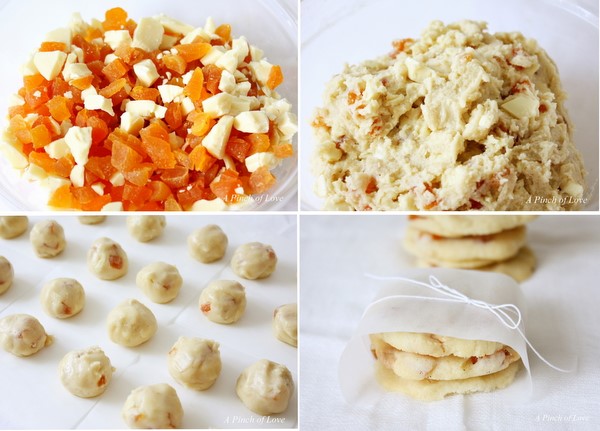 Later she was in the mission to teach me some Finnish, after hearing my poor Finnish pronunciation. We sat down and were learning, slowly her mum came and said in ears she is teaching you bad words. I was again thinking, 5 yrs in Finland, my knowledge level in this area is less than 5 yrs kids, jump again into lake. Oh don’t worry guys, I’m living city of lake! 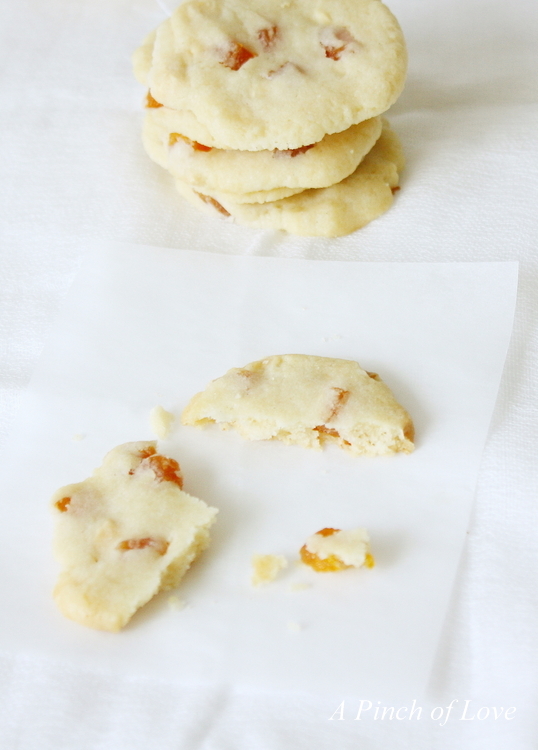 End of day, I came back home, with some cartoon tattoos and stamps on my wrist, some flowers which she picked and some gifts from their trip to India, wonderful evening it was. Another lesson learnt, to bring food into kids attention is difficult. This is not the first time, I have failed with my niece as well. Have to work more on it! 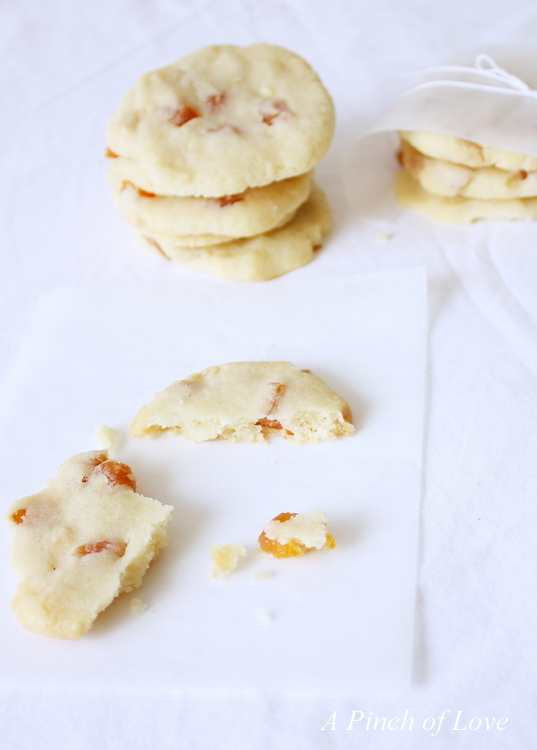 Note: this recipes makes a big batch, following day took it to office for coffee, colleagues enjoyed it, realised it was more for grown ups!!

150 gram butter
200 gram sugar
230 gram cream cheese
300 gram flour
200 gram white chocolate (chopped)
150 gram dry apricot ( cut in small pieces)
Method
Butter, cream cheese should be at room temperature.
Cream butter and sugar until light and fluffy, then slowly mix in cream cheese till it is evenly mixed. Add in white chocolate and dry apricot, then gently mix flour till a dough is formed. Make small balls out of dough. Give a small stab with fingers to flatten a bit and bake at 165 C in preheated oven for 15- 20 mins till turn pale pink brown.. Cool them for while for them to crisp up a bit!